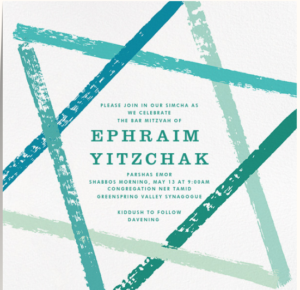 Growing up as a child, I was not allowed to attend other churches because the belief was that I may be taught the incorrect interpretation of the Bible and most of all not make it to heaven and go to the other place down below – hell.  Well, when I went to college and joined Old Dominion University’s Ebony Impact, a Gospel Choir, I was exposed to Catholic, Pentecostal, Baptist and other religious services.  These experiences were my first time seeking a better understanding of religion.  I wish I would have taken a class on religion.  I will have to add “Take a Class on Religion” to my Creative Living over 40 experiences.   In continuing with my love for learning, I excepted an invitation to my co-worker’s son’s Bar Mitzvah.  A Bar Mitzvah is the religious initiation ceremony of a Jewish boy who has reached the age of 13 and is regarded as ready to observe religious precepts and eligible to take part in public worship.  I’ve seen on television and the movies how Bar Mitzvahs can be a very fun party and I like to have a good time so that was another incentive to go.

Before I start describing this religious experience, I must ask for your forgiveness in advance for not asking or researching what to expect at this celebrational event.  The Bar Mitzvah was held on a Saturday which is called by the Jewish community the Shabbat or Sabbath Day. They are not allowed to drive on this day and that is why you may see Synagogues, place of worship, located in the heavily populated Jewish community.  Can you imagine walking to your Church?  Also, cell phones or photography aren’t allowed to be used in the Synagogue.  Initially, I had my cell but decided to take it back to my car to ensure I did not disturb the service.

The three most popular types of Jewish Religions are Conservative, Reform and Orthodox.  The main difference is how the Jewish Written Law “The Torah” is interpreted just like we have different religions that consider the “The Bible” the Law.  I realized in my previous research that there are more similarities than differences in most religions.  I was going to be attending an Orthodox Judaism service.  Wow, I thought to myself.  I had an opportunity to experience Judaism.

As I entered the Synagogue, prayer was in progress.  As I was escorted to the women’s section, I noticed the men and woman were in separate areas of the church.  The men were wearing their Jewish Prayer Shawls (Tallit) and head coverings (Kippa).  The women were wearing either a scarf, hat or some other head covering.  Similarly, it reminded me of my home church where I was required to wear a knitted head covering or hat during service.  By the way, a wig did not count as a head covering.  I did feel like I was in a sacred place.

I asked a congregant if talking was allowed during the service because there were others whispering.  She said we should limit our conversation but I could ask her questions during the service.  My first question came after members stood at the altar and opened the ornate curtained-off cabinet that held the 5 books of Moses known as the Torah scrolls.  The Torah was carried from the holiest place in the synagogue at the altar to the bimah located in the center of the sanctuary.  While it was being carried through the sanctuary, members would touch the Torah with either their Siddur book or tallit followed by a kiss.  The canister that was being carried was about 3-4ft high and 12 inches in diameter.  So, I asked the question “Has anyone ever dropped Torah?  My neighbor looked at me with wide eyes as if I had cursed in church and said, “That would not be good. You would have to fast for 40 days.”  Being chosen to carry the Torah is an honor but comes with great responsibility and consequences.

There were people coming in at different times during the 2.5hr service.  We all stood up at specific times while reading the Psalms or Siddur books which were written in Hebrew.  This book reminded me of a Hymn book with songs.   While we were standing, people would perform different body movements at specific times while reading.  There were two sentences in the prayer book that was written in English that caught my attention.  The first read that you should read a Hebrew phrase in one breath.  The second read that at a specific point you should bend at the bow of the knees and then straighten out.  There was another body motion that was done which involved leaning forward, to the right, to the left and then back in place.  As I witnessed all the body movements, it looked like a dance everyone was doing in unison to worship God.  It was like silent music to my eyes.  I wish all my praise and worship experiences in a place of worship made me feel this way.  As I thought about my own church services, our worship leaders and pastors are always encouraging members to stand, worship and praise God.

The Torah was removed from the canister and placed on a stand located in the bimah which is located at the center of the sanctuary. As I saw my co-worker son go to the bimah to read from the Torah, I noticed he was not taking many breaths,  It was a melodic reading.  I asked why was there someone standing in front of him as if he was directing an orchestra?  She explained that he must read the Torah in a certain pitch, accents, tone and rhythm.   Now, I understood why his mother was excited and said he nailed it.  So, my next question was “What if he coughed or sneezed in the middle of the reading?”  She said she didn’t know and we laughed.

Children came into the sanctuary passing out flowers for Mother’s Day and candy.  Even though I had eaten breakfast, I could use a little candy after almost 2 hours.  So, I unwrapped one and ate it.  My neighbor looks over and says “You aren’t supposed to eat the candy.  We are going to throw it later.”  We both laughed. I had two pieces left. When it was time to throw the candy towards the center of the sanctuary, one of my candies hit an old man in his back.  Oops, I looked around to see if anyone noticed.  Two women just smiled at me and said: “That’s why we use soft candy.”

After two hours of listening to Hebrew, the Rabbi spoke in English.  It was a very inspiring message about striving for excellence in everything that you do. He spoke about the white space in between words on a page.  The white space is just as important as the written words. Everything serves a purpose.  Next, the young man who was celebrating his Bar Mitzvah spoke at the altar.  At the end of the messages, everyone said aloud “Mazel tov” which is a Jewish phrase used to express congratulations and good luck.

I was expecting a huge party like I’ve seen on television but it was a very simple reception that lasted maybe a half hour.  So, as I mingled a little and ate a plate of some Kosher food.  The experience confirmed that religions may have different ways to display their faith with rituals and practices but the underlying message is to love your neighbor.  I said my congratulations, goodbyes and then walked out to my car..  Yes, I drove.  Why didn’t I walk?  Hey, I was a guest.

If you were expired by this blog or have stepped out of your comfort zone, leave a comment.

6 thoughts on “The Bar Mitzvah Experience”

© 2016 QueenShe Visions All Rights Reserved
Design by SiteExecutivo
Scroll Up